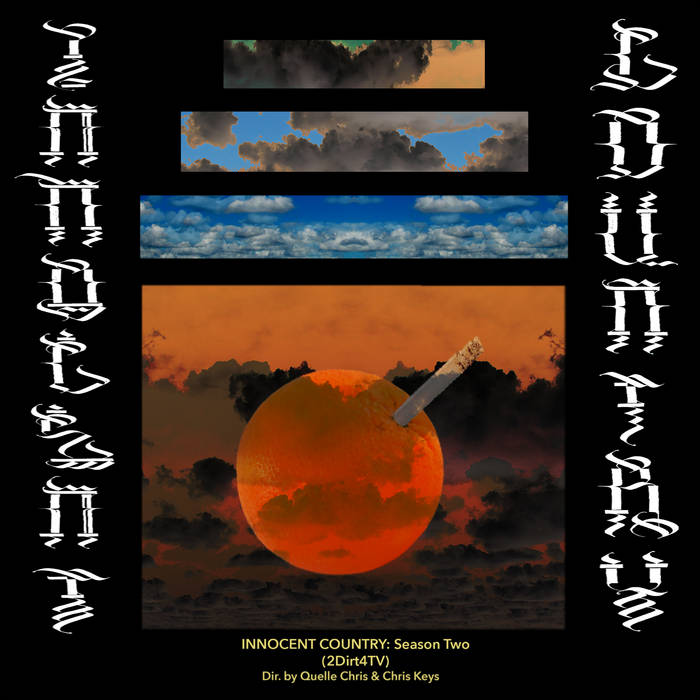 If now the time for voodoo amulets and protective talismans, sharpened swords and unbreakable shields, it’s also a moment for music to assume its highest form as a healing art, a source of benevolent spells, and a refuge from the chaos. After all, the best creators are always those that tap into the telluric current that exists below the surface. Those who delve into the collective unconscious so that timeliness is a happy accident; timelessness was always the intent.

If Quelle Chris and Chris Keys’ Innocent Country 2 sounds like an antidote for a moment of surreal anxiety, the same could be said of it a decade from now. It’s an album best understand in a dialogue with the first volume of the series. Released in 2016, the initial Innocent Country focused on isolation, pessimism, and the notion of finding peace within pain. At a time when those feelings convey the mood of the moment, Quelle and Keys have responded with a soundtrack that offers soothing light in a bleak timeline. A hopeful record in a hopeless moment, precisely when it’s needed most.

The country that Quelle describes is presented in both the individual sense and as a whole, a nation whose hands are stained with blood. It’s about recognizing the complexity of our fractured identity, the good and evil that most of us contain, our ability to acknowledge, grow, heal, help, communicate, live, and learn from one another. It is a subtle and soul-reviving record that reveals its depth in layers and repeated listens. An organic and preternaturally funky album that could’ve emerged from Electric Ladyland Studios during the peak of the Soulquarian movement, yet feels distinctly contemporary. A long-lost Slum Village record excavated from the vaults, except it could only come from Quelle Chris and Chris Keys.

The cast of collaborators is as impressive as any record in recent memory. Earl Sweatshirt, billy woods, Homeboy Sandman, Pink Siifu, Cavalier, and Denmark Vessey all kick indelible laser-eye guide raps. Two of the funniest people on earth, Marcella Arguello and Josh Gondelman (a writer and producer on Desus & Mero) perform skits, including the former’s hilarious rant about the importance of never sending a call straight to voicemail while you’re tweeting. Merrill Garbus of tUnE-yArDs, Starr Busby, and Melanie St. Charles contribute beatific hymns and eternal soul.

Behind the boards, Keys channels the spirit of Dilla with a level of vitality and imagination that transcends the millions of bedroom imitators who think it’s only a matter of chopping samples with an MPC. The truth goes much deeper. The keyboards and drums need to be played with warm and triumphal spirit, an intuitive connection to the organic rhythms of the old earth. It’s a communion with ancestral traditions: jazz, rhythm and blues, funk, gospel, reggae, and of course, the hip-hop titans who preceded them.

Over a decade deep into a sterling career, Quelle Chris continues to evolve and somehow improve. Pitchfork hailed his singular blend “of serious reflection and satire,” which make him one of hip-hop’s most resonant cultural critics. Always fiercely intelligent and a virtuosic MC, he’s become a brilliant arranger of sounds, personalities, and ideas. This is symphonic hip-hop that sidesteps the usual clichés (“get me strings,” “get me Jon Brion,” etc) and obliterates boundaries between genres without relying on watery fusion.

“There is “Living Happy,” which sounds like a lost middle bridge between Midnight Marauders and Beats, Rhymes and Life, which contains the richness and inextinguishable soul of Detroit. It’s hook finds Quelle tossing out every classic dance step from the stanky legg to the running man. “Sudden Death” floats via hypnotic grand pianos, conjuring images of two-stepping in old jazz parlors. It’s the sort of thing you imagine they’re playing in an Ernie Barnes painting. On “Mirage,” Quelle trades bars alongside Earl Sweatshirt and Denmark Vessey; it sounds like a rap clinic held inside a church now converted into a basement speakeasy, where dime sacks and bootlegged rye were given to every parishioner.

As the voice of Big Sen rides out, he issues the declarative that this is for anyone fed up and trying to transmit the anger into beautiful art. This is art that is always the truth. It isn’t here to play “woke” or conscious or some other label that distracts from the music and the message. It is 16 spells of positivity, inviolate and honest, profoundly felt and unfaltering.