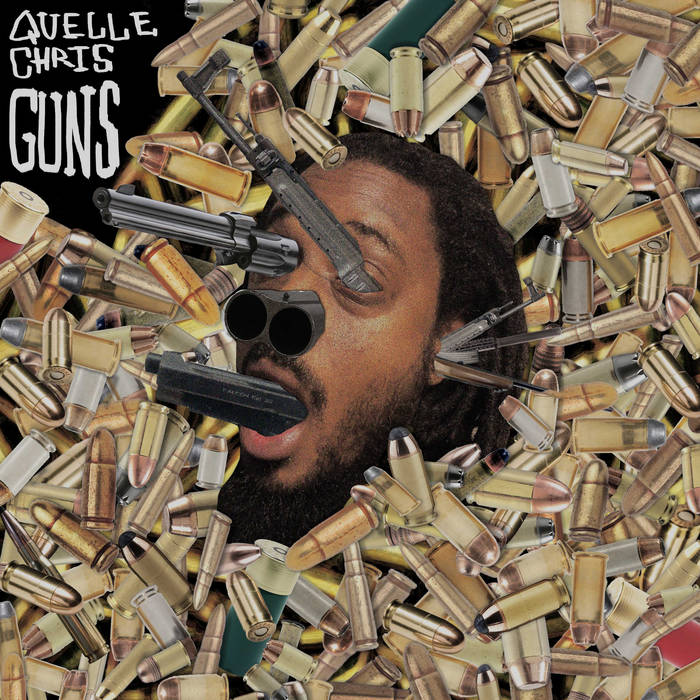 The Microscopic Giant "Who are you? What do you want from me and what was I before you?"
more...

Every time a shooting makes the news talking heads pop up in small boxes and make loud arguments about how we shouldn’t rush to politicize what just happened. After all, the heads argue, guns don’t kill people. People kill people. But how true is that? Are the tools we use simply tools, innocuous until we give them meaning? Or are the things we surround ourselves with –– the things in our arsenal –– begging to be weaponized, for good or for evil? Guns, the new album from the critically acclaimed rapper and producer Quelle Chris, is a careful study of all these questions, an urgent record for urgent times.


“Guns is an arsenal of both sounds, styles, and subjects, Quelle says, taking a thorough look at “the words we say, what we fear, how we love, how we live, what we ingest, what we believe in, who we idolize, shit like that.” To this end, the New York by-way-of Detroit savant attacks his topics from multiple angles: there’s the jagged, minimal “Obamacare,” which plays like a confrontation, but there’s also “Wild Minks,” where Quelle and the enigmatic New Jersey rapper Mach-Hommy spin silk out of the softest textures in their parents’ record collections. In the service of examining big ideas with grave consequences, we get to hear a master technician deploying every piece of ammo he has.


In times that are often beyond parody, Quelle has never been a writer to shy away from the absurd. But Guns is dotted with references to the very real, painfully ordinary fates that might befall us –– be they getting gunned down in church on a Sunday or simply being forgotten by our friends after we’re gone. In preparation for both, Quelle lays his psyche bare. Maybe his identity is best summed up by the three-word descriptor he gives himself toward the record’s end: “handsome, black, and headstrong.”


Quelle handles the vast majority of production duties himself, with assists coming from Dane and Chris Keys. Guns covers sonic ground quickly: it opens with the skeletal creep of “Spray & Pray” and closes with “WYRM,” which is sweeping and contemplative. In between there are detours to the lush and playful (“PSA Drugfest 2003”) and to the grim and digital (“Mind Ya Bidness”). As always, Quelle delivers music that’s innovative and idiosyncratic without sacrificing the gut-punch of more commercial releases; in fact, there are moments when Guns rattles trunks like few rap LPs in recent memory.


Slated for release via Mello Music Group on March 29, Guns is Quelle’s third studio album in three years: each Quelle Chris album is distinct and fully-realized: see 2017’s Being You Is Great, I Wish I Could Be You More Often, an off-kilter probe into the ways we see ourselves, or see last year’s collaboration with Jean Grae, Everything’s Fine, which was biting satire for the dawn of a new dystopia –– and which was adored by critics, being named to ‘best album of the year’ lists by countless publications, including Pitchfork, The Wire, and Bandcamp, who dubbed it the best album of 2018.


Guns is not content to rest on those laurels. “My goal with this and all albums is to create pieces people can enjoy, start to finish, for decades to come,” Quelle notes, fully aware that in a fractured, streaming ecosystem, any shard of your identity released into the world might be the lone artifact that survives. This is a record that is constantly aware of the peril all around us, but instead of shrinking in the face of that knowledge, it reasserts its creator’s identity. Aided by excellent guest turns from the likes of Jean Grae, Denmark Vessey, Cavalier, Mach-Hommy, Bilal Salaam, and more, Quelle Chris has delivered perhaps the most pointed, most personal, and all-together perfectly crafted album of his career.