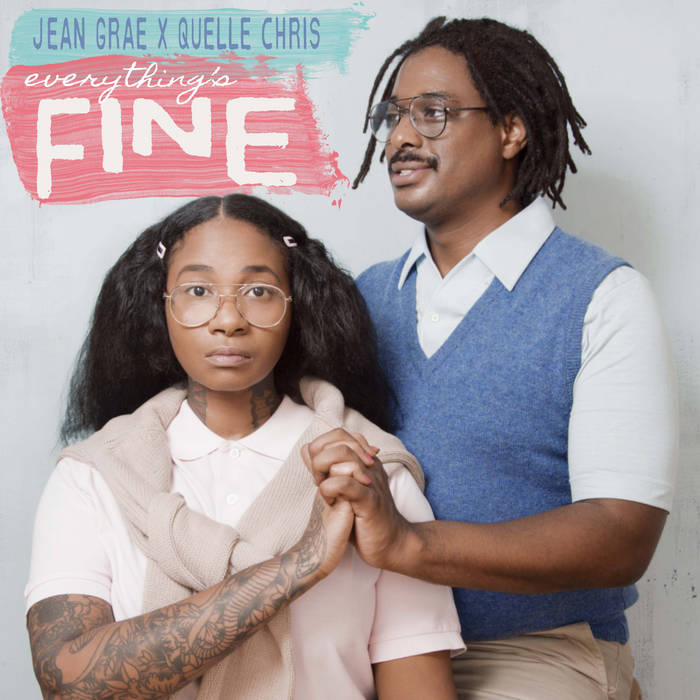 ya_fluid_friend_al My favorite hip-hop album of 2018. A biting commentary on the anxiety and uncertainty of current times while trying to find the good in a dark time. Favorite track: My Contribution To This Scam.

willy vlyminck The second Hip-Hop recording in my collection. In general I am not a big fan of this genre, but this is fab. in all possible ways. Everything is fine.

When you hear the phrase, “everything’s fine,” we immediately understand it as emotional shorthand. In daily life, we depend on those perfunctory clichés (hope all is well, good to hear from you, etc.) to spare ourselves from the psychological unpacking that the truth requires. For that, there’s art. For that, there’s Everything’s Fine from Jean Grae and Quelle Chris, a jagged, acerbic odyssey that brilliantly riffs on this dystopian zeitgeist.

The thing is, anyone without a lobotomy and a toxic red hat understands that things are definitely not fine. The crush of modern anxiety, the late capitalist scramble to survive, and the brain warp rot of social media has left most of us half crazy.

“We have a dickhead for a president, and before our eyes, racial, religious, and sexual identity rights are moving backwards,” says New York’s (by way of Detroit) Quelle Chris. “Money is still a thing (I’m waiting for Star Trek life to start). There’s war, your kids may be sick, but if someone randomly asks "how's it going?" most people will say "fine."

Released on Mello Music Group, this album replaces that reflexive cliché with honest and eloquent tangents. It’s specific and subtle in its execution, achieving equilibrium between lackadaisical detours to smell the flowers and the frantic acknowledgement that there’s an inferno raging outside.

If the great political albums are often grim polemics, Everything’s Fine achieves its goals partially through withering satire. See the opening skit, a Prince Paul-style game show in which three contestants (including a futuristic robot) numbly croak that everyone’s fine despite flying high on every imaginable drug, crying themselves to sleep at night and being unemployed for a decade and a half despite having a Master’s in Fine Arts. I promise it’s much funnier than it reads off a screen.

“We’re both perfectionists in different ways,” Jean Grae describes their working relationship. “We both see huge pictures and concepts. So while listening, pay attention to the subtleties, the nuances, the dissonance and the harmony. The conversations and pieces of ourselves in the words, the flows, the beats. All of the open spaces. .Be uncomfortable and be okay with that. Be layered and be okay with that. Be angry and be okay.”

It’s rare to find a record where two rappers are so seamlessly intertwined. Yes, that’s partially a by-product of the teamwork that goes into being in any normal relationship where you wake, sleep, and dream together. But the album also bears the hallmarks of two singular creative geniuses trading bars, collaborating on beats, and combining fun with internal therapy and external observations. It features indelible cameos from Denmark Vessey, Grammy Award winner Anna Wise, Your Old Droog and Big Tone, as well as comics Ashok “Dap” Kondabolu, Michael Che, Nick Offerman, and Hannibal Burress.

In the streaming era, we tend to naturally overlook albums that require multiple listens. This is a record that will grab you on first listen, but it’s greatness only reveals itself through its careful construction, slick wordplay, and esoteric allusions.

On “Zero,” Jean artfully references Rachmaninoff and The Donner Party in the first two bars. With “Scoop A Dirt,” she name-drops the Babadook alongside the truth bomb that Friends was little more than a whitewashed rip off off Living Single. Meanwhile, Quelle balances boasts about bags of cash the size of Chris Christie with poignant existential laments. Somewhere in between, Jean will stealthily slip in jewels like, “it took me until my 30s just to put my finger on it, once you accept the knowledge/solace doesn’t follow/honest.”

It’s a record with only a couple antecedents: De La Soul is Dead, Organized Konfusion’s Stress: The Extinction Agenda, Blackstar, and maybe Cannibal Ox’s Cold Vein. Yet it doesn't sound remotely like any of them. It’s spontaneous and free, yet refined and meticulous. Even if everything is abject, it’s a reminder that music can transcend.

“This album is full of our minds. Our hearts. Our love for production, and words. flow and a lot of musicality,” Jeans says. “We don’t approach topics, issues, writing, or making beats in the same way. I’m harsh, blunt, quick, technical, I arrange classically and play more than I sample. I make joints with 80 tracks. I’m layers upon layers upon layers. Quelle is patient, he’s kinder. More loose and minimalistic. He makes sounds work together that shouldn’t fucking work. How? I have no idea. These are dreams within dreams.”